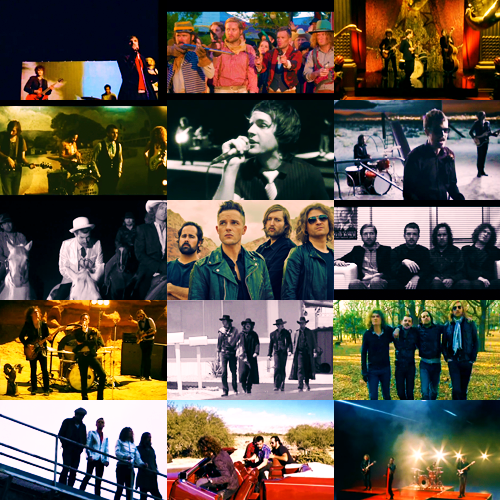 And yet the indie crowd and much of the media still slam them. Many critics can’t accept a bridge that unites the seemingly incompatible kingdoms of Morrissey and Bruce Springsteen, and therefore an incredulous, bullying tone follows the Killers everywhere. There’s the implication that frontman Brandon Flowers’ Mormon faith and apparent lack of self-destructive tendencies makes him unfit to rock; it’s the 21st century, dudes have been wearing eyeliner since Elvis, and yet even Pitchfork has called the band’s stage presence “prissy.” Their lyrics are shot full of holes, yet if Animal Collective had come up with “Are we human, or are we dancer?” they’d be hailed as cryptic geniuses. Rarely do the Killers get credit for being one of the few working-class bands with the temerity and talent to achieve populist yet defiantly arty rock stardom at a time when even middle-class musicians with better educations don’t dare dream of transcending the Brooklyn boho ghetto.
–Spin, 2012

Nicely said. And gets at why I think this band has mattered so much to me personally in the last couple of years.

I think that creative voices (of whatever type) that lay on the ironic detachment by the bucketful are losing meaning and relevance in this era, where the challenges are so thick and so immediate that “oh doesn’t it all suck ha ha” cannot help but sound hollow. I think there is a dawning realization, very broadly, that we have to do, whatever it is that we do, with the head and the heart, and that to hold yourself detached is to make yourself fundamentally irrelevant. If there’s one thing The Killers today don’t do, it’s detachment.