A couple of weeks ago I went to an event called Cincy Sundaes that I though definitely belonged in the Good Ideas file.  The book talks about the importance of small improvements and Little Bets and micro-entrepreneurs, and crowdfunding, even for micro-projects, both helps good ideas take root and demonstrates the support that an idea has. The first one was held in a craft beer brewer/hall/hangout space in an old building in Over the Rhine.  I was amazed at how many people showed up – this is just a sliver of a big room:

And of course, you got a sundae (the ice cream and toppings and stuff  were donated.  I wouldn’t say beer and ice cream mix well, but this is Cincinnati, after all)

There were four ideas that were being pitched.  Everyone received a paper summarizing the proposal and what they needed funding for:

And after all four had presented, everyone got a vote.  The winner, when the votes were tallied, received the proceeds from the admission plus a small donation from a local business.  It totalled something like $1,300, not a ton but enough to get a small good idea off the ground. The proposal that won, though, had a distinct advantage: they had an art teacher on their team who could draw on the fly, 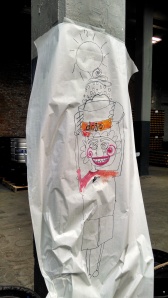 Plus they got everyone else drawing, which is always a good way to stick out in people’s minds.

So after 2 hours, one project got a little seed money to get going, three projects got some important exposure that will hopefully help them find other supporters, and a few hundred people walked out with laughter, beer-and-ice-cream-full tummies, a sense of having helped something good happen.

Not too hard, but pretty awesome.  You can probably do this, too.  To learn more, check out www.cincysundaes.com