I am currently preparing a revision to my first book, The Local Economy Revolution: What’s Changed and How You Can Help.  I decided to update it to capture some of the things I’ve learned since it was first published in 2013.  Look for the new and improved version later this winter.

The centerpiece of that book is a series of statements called The Wise Economy Manifesto, which I first published in 2011.  So I’d better start there.

Welcome to the Fusion Economy. Time to put the Industrial Era behind us.  This is the uber-issue, the thing that makes every other item here not just a nice-to-have, but crucial, imperative.  We’re getting left behind by ourselves. The transition we’re currently making isn’t between an Internet 2.0 and Internet 3.0 economy, or between an Information Economy and something else.  It’s much more profound and pervasive than that. 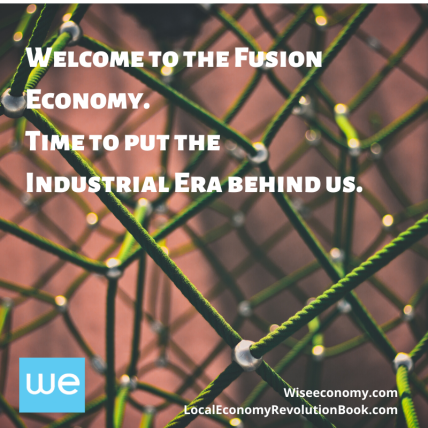 We’re still too much stuck in the Industrial Era, especially in how we structure government, public programs and businesses, and especially in terms of how we manage people in any of those settings. But emerging technologies and societal expectations and new ways of working are pulling us, sometimes dragging us, into a new place, which I’ve taken to calling the Fusion Economy.

Many of our most difficult struggles come from the deep mis-matches between the basic operating paradigms underlying those two economies.  A lot of what we did before didn’t really work very well, or didn’t work well for everyone. But because we were thinking in Industrial Era logic, we too often didn’t notice.  Now they work worse than ever. And we don’t have that excuse anymore.

**From the upcoming book, The Local Economy Revolution Redux: What’s Changed and How You Can Help.  Coming Spring 2020 from Wise Fool Press.